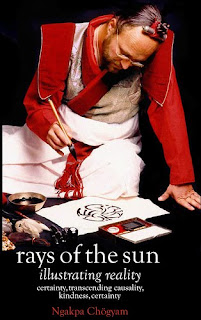 Rinpoche was first asked to teach by Gétsulma Tsültrim Zangmo, a Western nun ordained by the 16th Gyalwa Karmapa.  Rinpoche named her 'ö-Zér Nyima after she received Dzogchen sem-dé transmissions from him - and this book is dedicated to her memory. 'ö-Zér Nyima means Rays of the Sun - and exemplifies the lively, cheerful, unobstructed vision of an extraordinary English woman - and the nature of the teachings presented in this collection of talks.  They espress the strongly held non-sectarian viw that was the basis of Ngak'chang Rinpoche's friendship with Gétsulma Tsültrim Zangmo - 'ö-Zér Nyima - Rays of the Sun.
Posted by 'ö-Dzin Tridral at 01:03

Email ThisBlogThis!Share to TwitterShare to FacebookShare to Pinterest
Labels: Ngakpa Chögyam, Rays of the Sun