Moving Being : Review by Sergio Dubois

"The illustrated handbook of Tibetan yogic exercises – Moving Being by Khandro Déchen – introduces readers to the principle and function of a vital set of exercises called sKu-mNyé. As both a formal Vajrayana student, spiritual friend of several Nyingma Lamas, and a practitioner of Qi Gong and Tai Qi, I find these practices situated at the crossroads of several of my life passions – where stillness of motion and the motion of stillness fuse into absolute experiences of the nature of mind.

For Tai Qi and Qi Gong students like myself, implicit instruction in modern schools frequently lacks illuminating clarity in the Taoist fundamentals of the practices. Khandro Déchen beautifully and brilliantly establishes the foundations of Dzogchen Longdé from which this Tibetan yogic practice arises in a way that stands as its own treatise on the subject. The student may go forward with the implicit practice instructions within the rich context of a very lucid and clear understanding of the principles from which the functions of the practice are made possible.

Several components of sKu-mNyé are extraordinarily effective. Gazing and the practice of circling the gaze facilitate the emphasis on “focusing in space”. I have found that these “massages” of the optical sense field have a particularly amazing effect in combination with the other moving elements of the practice. Supine meditation posture (lying down immediately after each exercise, for up to three times as long as the exercise) is where the real magic of the practice is experienced. In the period immediately after practice, profound experiences (nyams and Zap-nyams) occur in the “meteorological” space around the body as these energies appear to move both towards and away from the “central channel” – the space of our being.

I wholeheartedly recommend this book to anyone that has an interest in Tantric Buddhism, enjoys Yoga, or practices any of the inner martial arts such as Qi Gong or Tai Qi. I feel my life as a student in several of these areas is vastly enriched by the beneficial teachings offered in this book. As I continue my preliminary study with only the book, I enthusiastically look forward to receiving transmission and instructions for these teachings from authorized teachers and adopting this as a principle yogic exercise practice in this lifetime." 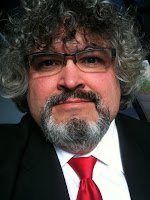 Sergio DuBois is a senior practitioner of Tai Chi and Qi Gong and of meditation from the Tibetan Vajrayana tradition. Beginning in the nineties, Sergio studied Tai Chi outer forms in the Taoist school of Master Moy Lin-shin, and studied Baduanjin ("Eight Pieces of Brockade") inner form Qigong in the school of Dr. Yang, Jwing-Ming. Shortly after the turn of the century, Sergio was introduced to buddhism through an auspicious spiritual friendship with Getsulma Ani Pema Chödrön, and became a formal student of Dzigar Kongtül Rinpoche, her teacher and a Lama of the Longchen Nyingthig lineage from the Nyingma tradition. Currently, as a senior systems architect with EMC², Sergio aspires to living as a Ngagpa (a non-monastic, house-holding lay practitioner of Vajrayana) bringing a rich life with his wife and sons to the path of realization and self-liberation for the widest and greatest benefit possible.

Available from Lulu.com
Posted by Aro Books worldwide at 19:45