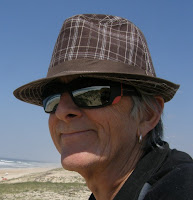 Young Victor Simmerson feels alienated growing up in a Surrey village in post-war Britain. A free-thinking lad with an outlook ahead of his years he is distanced from his elderly disciplinarian father and turns to his gentle neighbour Mr Love for company. The ‘shell-shocked’ Mr Love wears ‘Evelyn Waugh clothes and possesses a collection of American Blues 78 rpm records. Victor is totally hooked by the imagery and romance of Blues. At the tender age of twelve the story of how the Devil granted a super-human talent as a guitarist and singer to the legendary Bluesman Robert Johnson in particular fascinates him. He learns that Johnson met the Devil or the African god Legba at ‘the crossroads’. Victor wants to try this himself but reckons his local crossroads near the village of Netherfield lack the qualities of the Mississippi Delta and decides to ramp up the element of danger by cycling there naked with his plastic ‘Skiffle Junior’ guitar on his back. When the Devil fails to turn up he cycles home disappointed but undaunted.

‘An Odd Boy’ is crammed with little gems and enchanting anecdotes like this. The character of Victor is reminiscent of the best of the American writer John Irving’s creations. Peppered with Blues couplets and quotes from ‘Alice In Wonderland’ to illustrate his point the author recounts Victor’s thoughts and observations of the suburban world he is growing up in in the sixties. Preferring the company of girls to boys (much to his father’s disgust) at five he falls in love with Alice, the daughter of liberal-thinking neighbours the Trevelyans, and they plan their future marriage down to the last detail. At junior school Victor is bullied by the other boys because of his German mother with shouts of “I’ll ’ityer!” (Heil Hitler). His Grandmother (Clara Schubert) is sympathetic to Victor’s aspirations. She had fled the Nazis at the beginning of the war and her story of how Hitler had killed the family’s parrot is a memorable one. Seemingly the radio station would turn up the volume when Hitler came on the air. The parrot had been sitting on his perch alone in the living room. During a particularly loud rant by the Führer the poor parrot was so shocked by the menacing voice he fell off his perch and died.

Victor fails to achieve the necessary five ‘O’ level passes for Farnham Grammar School for boys and instead applies for an interview at the girls’ grammar which only required three ‘O’ levels using just his surname and first initial. At his interview with the headmistress she expresses disbelief. “This is a—gells’—grammar school - and you are a boy. Is that not a problem?” He explains the number of ‘O’ levels differences. “I’ll wear a skirt, I’ll buy the uniform myself.” Victor assures her earnestly. The headmistress is amused and writes a letter to the headmaster of the local comprehensive school to secure him a place there.

‘An Odd Boy’ is an absorbing and rewarding read, a memoire written as a novel, unique in its vision of the world and in my estimation, worthy of modern classic status. Apparently this is just Volume One and the sequel, ‘Hellhound on My Trail’ is in the pipeline. I look forward to reading it.


John Dummer has been a local paper reporter, music business press officer, record plugger and broadcaster. In the sixties he toured with his own John Dummer Blues Band and in the seventies drummed with the hit doo-wop revival group Darts. He met his wife Helen when she was the photographer on a Darts photo-session.


After Darts, Helen and John formed their own group, True Life Confessions, and also recorded as the duo, John Dummer and Helen April. John went on to manage the powerhouse rock trio the Screaming Blue Messiahs.


After three years of touring the States, burnt out from all the madness, he upped sticks with Helen and moved to France. There followed a two year sojurn living in a windmill in the Alentejo region of Portugal, and a return to France with finances much depleted. They discovered if they registered as 'brocanteurs' (French antique market traders) they could work and be covered under the excellent French health system.


It was working the French outdoor markets and the amusing and fascinating characters he met that inspired John to write his first book, Serge Bastarde Ate My Baguette. The sequel Son of Serge Bastarde is published by Summersdale on June 4th. John and Helen now live in South West France in the middle of the Landes forest with their dog Buster and quite a lot of cats.


Excerpts can be read on Doc Togden's Facebook fanpage and at anoddboy.com

Posted by Aro Books worldwide at 21:43