The band who could have rivalled Cream 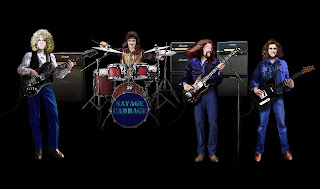 The peak of the British Blues Boom – and Savage Cabbage the band who could have rivalled Cream. At their height they were billed with Rory Gallagher’s Taste at ‘Colonel Barefoot’s Rock Garden’ where psychedelic lyrics and electric blues ignited the night. The arts became rampant street-culture – roaring like wildfire from ’68 to ’70.


Excerpts from an odd boy can be read on Doc Togden's Facebook fanpage and at anoddboy.com

Volume one was published in 2011 and is available on amazon.com, amazon.co.uk and lulu.com

Posted by Aro Books worldwide at 07:36